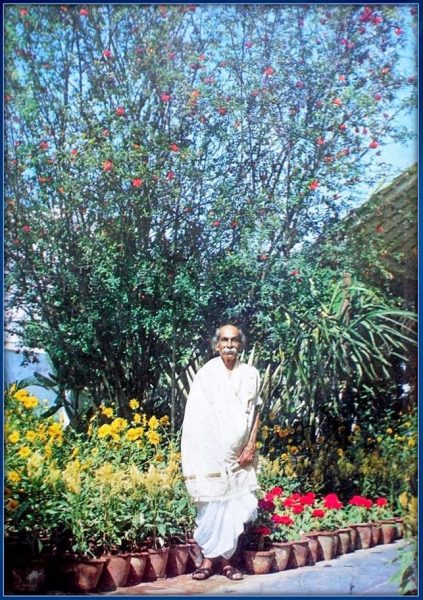 33 years ago, on 7th February 1984, Nolini Kanta Gupta, a foremost disciple of Sri Aurobindo and The Mother, left his body.

The Mother Herself had testified to Nolinida’s inner status on his birthdays cards. In 1969 she said, “en route towards the superman”, in 1970 “with love and affection for a life of collaboration”… “For the prolonged continuation of this happy collaboration”… and in 1973, “My blessings for the transformation.”

As Sisir Kumar Mitra wrote, “Ever averse to limelight and to any personal reference, Nolini Kanta rarely speaks about himself.  His grave personality with its reserve and firmness covers a soft heart, a sweet amiability and a humorous temper which only the yogi in him knows how and when to express”.

In the following weeks we will share several tributes to Nolini-da’s life. These reminiscences we find to be very inspiring and moving.

With the passing away of Nolini Kanta Gupta at 4.42 p.m. on February 7 something precious in our world of time ceased to pass away: a life of profound spiritual moments reached at the age of ninety-five its grand total and, becoming a rounded whole, grew a permanent part of history.

Regarded by all who knew him as the disciple whom Sri Aurobindo and the Mother had considered the closest to themselves in many respects and had appointed their Ashram’s Secretary from almost the very beginning, Nolini lived lately with a quiet inwardness making no display of the richness of its contents yet effortlessly pervading the Ashram’s atmosphere. After Sri Aurobindo and the Mother had departed, his personality helped much to sustain the manifold activities which the two great Initiators had set in motion to realise more and more their vision of a new creation on earth rather than a gradual preparation for freeing the soul into some beatific Beyond.

Not that this Beyond was ever out of cognisance in the Aurobindonian Yoga that Nolini followed. Indeed the uttermost of it was the goal, what the Master called Supermind, the ultimate Divine Dynamism that not only has manifested the world but also holds the secret of the world’s divinisation through an evolutionary process. To attain the Supermind yet not merely to rest in its luminosities was the spiritual path originated by Sri Aurobindo and the Mother: the aim always was to bring that supreme perfection down into the terms of mind, life-force and even body.

Faithful to his Guru’s demand, Nolini worked indefatigably towards the spiritual heights and sought to express them here below. It is notable that during the last months of his life he who was never given too much self-disclosure, let escape a few words which afforded a sign that he was working from a level which Sri Aurobindo had described as nearer to the Supermind than any other. On one of his daily visits to Nolini’s room, Nirodbaran ventured the question among the attendants present there: “Where is Nolini-da’s consciousness these days?” Unexpectedly Nolini himself looked up and said: “Why, with the Mother.” Nirodbaran pushed the inquiry further: “But where exactly?” Nolini answered: “In the Overmind.” Although startling in its precision, this was not quite a surprise in its general drift, for all around him had been feeling that throughout the preceding months some unusual inner power had been accompanying the vicissitudes of his illness: a glow seemed to emanate from his face and there was a calm confidence in his dealings with troubled souls as though he had been graced with a new right of guidance.

Whoever was sensitive to spiritual influence could feel the presence of this power and this grace all about Nolini as his body lay in the immobility of death but diffused a most living and energising peace. A steady pressure from above one’s head brought the experience of a creative immensity urging us with its blessing towards a greater life and towards the fulfilment of Sri Aurobindo’s dream of the Ashram as a collective passage to a golden future.

Nolini’s true being is still with us and secretly continues here to serve the Divine who had a double incarnation amongst us, mastering our unregenerate human nature and mothering the evolving godhead in each sincere aspirant. Many memories surge up in me as I look back over the years since I first met Nolini in December 1927. His high forehead, his serious eyes which yet knew how to twinkle, his frequently raised eyebrows not indicating any disapproval but silently signalling his attempt to keep his mind uplifted, his full hanging moustache reminiscent of the Nietzsche who had first invoked, however faultily, the unborn Superman — none of these features changed through the decades. Although occasionally brusque in manner and speech, he had often a tender understanding of people, especially young ones. And I remember the Mother saying that she had never heard him speak ill of anybody to her. Another trait I observed was one to which Champaklal once drew attention. The Mother would at times ask Nolini what he had to say on this or that problem which had arisen or to make a pronouncement on some point needing elucidation. He would maintain a grave face as if giving thought to her question, but not a syllable escaped his lips. It was a scene of respectful silence appealing to her to frame the decisive word. Anything he spoke might come in the way of the plenary light she could shed. Anybody else would have been flattered into speech by the Mother’s gesture as of consultation. Not so Nolini in the least. The result was the Mother’s own deliverance of all-clarifying judgment. When, however, the matter was of a technical literary import, as happened now and then in the Mother’s French-translation class, he would respond with alacrity on hearing, after she had stated the uncertainty, the sweet trustful call: “Nolini?” Time and again, the Mother would send us to his room to get advice on a practical point concerning the aptness of one course of action or another in relation to Sri Aurobindo’s writings.

There is no doubt that though she was aware of human shortcomings even in the best of us, the Mother, in tune with Sri Aurobindo, had a very high opinion of Nolini as a practitioner of their Yoga as well as in his role of an evolved mental being. Still, this did not imply that she meant him to be her successor in any radical sense. Nobody could be an authentic successor to the Avatars of the hitherto-unrevealed Supermind. As things have stood, none can serve as a third Guru in the domain of so rare a reach of Divine Consciousness. Neither did Nolini ever claim to be such. But nobody deserved as richly as he to be a potent helper on the way, the exemplar of a lofty spiritual detachment which could yet be the door-opener of a treasure-house of inner knowledge and prove a warm-hearted brother at once unobtrusive, sympathetic, elevating. He has also figured admirably as a guardian of the Ashram by his wide reputation for deep mystical experience and a many-sided wisdom. Here was a guardian alive to the need in Sri Aurobindo’s and the Mother’s unique experiment in the reshaping of man that the seat of this experiment — the Ashram — should be left free to proceed on its own inspiration with the light caught from the founders of its Yoga of Supramental Descent and Transformation.

Well may we set up for ourselves, as those founders’ co-disciples with the illumined soul that has left its body, the ideal of being as Nolini-like as possible.