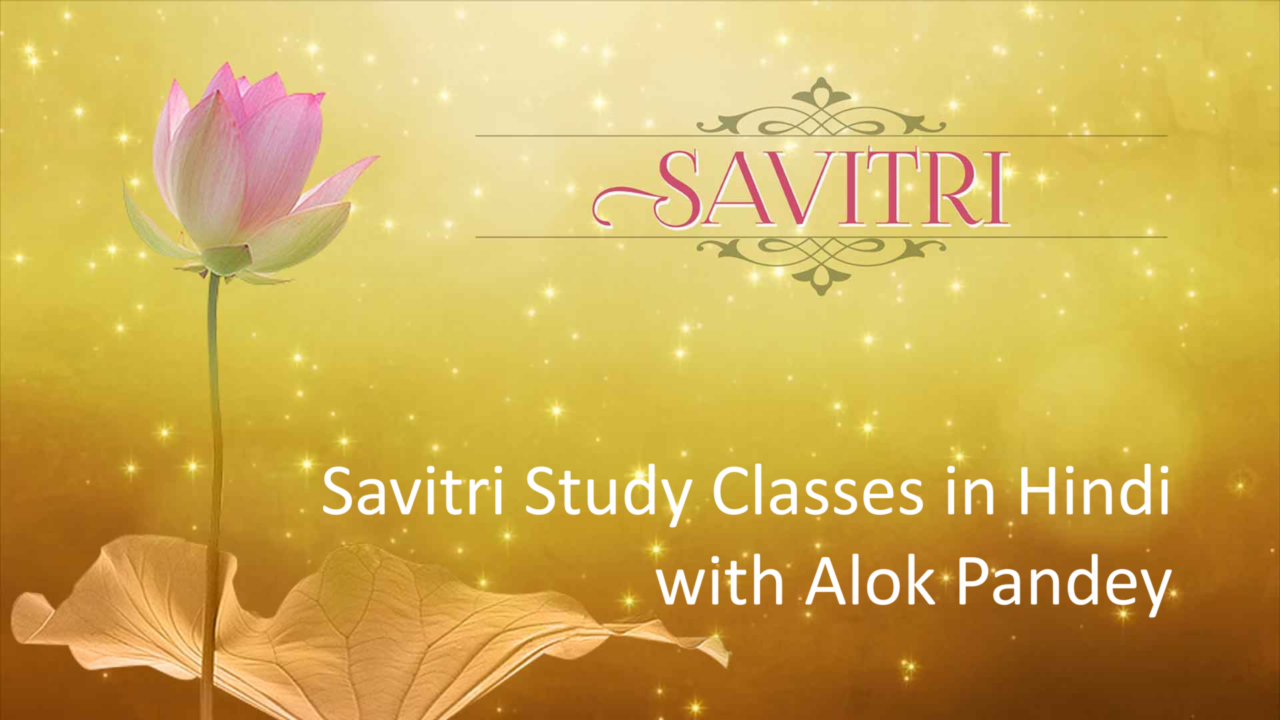 Savitri Class in Hindi with Alok Pandey
Savitri Book II: The Book of the Traveller of the Worlds, Canto II: The Kingdom of Subtle Matter; Canto III: The Glory and the Fall of Life

It was a world that could not fear nor grieve.
It had no grace of error or defeat,
It had no room for fault, no power to fail.
. . .
It dreams not ever of what might have been;
Only in boundaries can this absolute live.
In a supremeness bound to its own plan
Where all was finished and no widths were left,
No space for shadows of the immeasurable,
No room for the incalculable’s surprise,
A captive of its own beauty and ecstasy,
In a magic circle wrought the enchanted Might.
The spirit stood back effaced behind its frame.
Admired for the bright finality of its lines
A blue horizon limited the soul;
Thought moved in luminous facilities,
The outer ideal’s shallows its swim-range:
Life in its boundaries lingered satisfied
With the small happiness of the body’s acts.
Assigned as Force to a bound corner-Mind,
Attached to the safe paucity of her room,
She did her little works and played and slept
And thought not of a greater work undone.
Forgetful of her violent vast desires,
Forgetful of the heights to which she rose,
Her walk was fixed within a radiant groove.
The beautiful body of a soul at ease,
Like one who laughs in sweet and sunlit groves,
Childlike she swung in her gold cradle of joy.
The spaces’ call reached not her charmed abode,
She had no wings for wide and dangerous flight,
She faced no peril of sky or of abyss,
She knew no vistas and no mighty dreams,
No yearning for her lost infinitudes.
A perfect picture in a perfect frame,
This faery artistry could not keep his will:
Only a moment’s fine release it gave;
A careless hour was spent in a slight bliss.
Our spirit tires of being’s surfaces,
Transcended is the splendour of the form;
It turns to hidden powers and deeper states.
So now he looked beyond for greater light.
His soul’s peak-climb abandoning in its rear
This brilliant courtyard of the House of Days,
He left that fine material Paradise.
His destiny lay beyond in larger Space.

Canto Three
The Glory and the Fall of Life

AN UNEVEN broad ascent now lured his feet.
Answering a greater Nature’s troubled call
He crossed the limits of embodied Mind
And entered wide obscure disputed fields
Where all was doubt and change and nothing sure,
A world of search and toil without repose.
As one who meets the face of the Unknown,
A questioner with none to give reply,
Attracted to a problem never solved,
Always uncertain of the ground he trod,
Always drawn on to an inconstant goal
He travelled through a land peopled by doubts
In shifting confines on a quaking base.
In front he saw a boundary ever unreached
And thought himself at each step nearer now,—
A far retreating horizon of mirage.
A vagrancy was there that brooked no home,
A journey of countless paths without a close.
Nothing he found to satisfy his heart;
A tireless wandering sought and could not cease.
There life is the manifest Incalculable,
A movement of unquiet seas, a long
And venturous leap of spirit into Space,
A vexed disturbance in the eternal Calm,
An impulse and passion of the Infinite.
Assuming whatever shape her fancy wills,
Escaped from the restraint of settled forms
She has left the safety of the tried and known.
Unshepherded by the fear that walks through Time,
Undaunted by Fate that dogs and Chance that springs,
She accepts disaster as a common risk;
Careless of suffering, heedless of sin and fall,
She wrestles with danger and discovery
In the unexplored expanses of the soul.

Back to: Savitri Study Classes in Hindi