Essays on Yoga > Asking the Divine for Something

Since the Divine is indeed the source of everything and since one of His aspects is that of the giver of all boons, there is nothing wrong per se in asking Him for material, psychological or spiritual things. 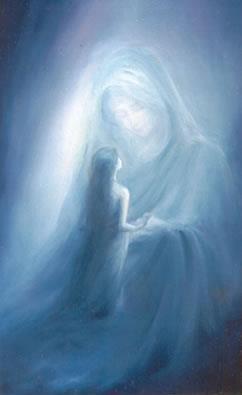 However, this asking and getting should not become the basis of our faith nor should the material things we ask for becoming a way of life or worse still, its goal. Equally, it should not become an excuse for inaction or inertia since evolution through effort is the law of all earthly life. It is also important to note that while we may ask anything and everything from the Divine, it is up to Him to grant them or not. However, to ask the divine only for material things is like asking the King of the worlds for dust. If it is the dust of His Feet then it is a different matter but there is also the dignity of the Creator.

When we ask Him something why not ask for a New Creation itself, a creation that is the fulfilment of the aspiration of the Ages, the human aspiration for Light and Peace and Harmony and Truth and Beauty and Bliss. Or if we feel it is too much to ask since this involves not just us but the whole earth, we can still ask Him for these things for ourselves, for the right attitudes and the qualities needed for a true life, qualities of faith and courage and aspiration and equanimity and peace. Or we may ask Him for the Permanent, the True, the eternal rather than transient things that cannot last forever.

But the best of all is to ask Him rather than what He can give or grant. Of course, to ask Him for Himself means a tremendous love for Him in which we ready to lose all, give ourselves completely and unreservedly to Him. Such a love and devotion is rarest of rare and if one ever finds it in anyone it is the sign of someone specially marked out and chosen by Him. Since it is so rare, the stories depicting such boons sought from the Divine are also very rare. Yet we do find them in mythology, stories of Dhruv and Prahlad, stories of Mirabai and Shabari,  Arjuna and few others that have become immortal legends etched in the memory of our soul and which continue to inspire generations.

Of course, we have closest to us the Divine example of Sri Aurobindo and the Mother Herself where we find such an entire and unreserved self-giving. But then few are strong and ready to annul themselves so that only God may be.

Back to: Essays on Yoga